How To Sharpen Ninja Blender Blades – Step By Step

Want to know a harsh truth? No matter how good your blender blades are, it’s nothing but impossible to stop them from getting blunt over the usage of years. Unfortunately, that’s true in case of Ninja blenders as well.

But who said you’ll have to stick to blur blades or get a new blender when you know how to sharpen ninja blender blades? The surprising fact is sharpening blender blades is so easy that you can pull the job off at your own home.

All you need to do is go through a few steps and your blender blades will become sharp enough to chop and blend again anything you’ll put in there.

When it comes to electronics, the care part depends mostly on if you’re following the right steps or not. The same goes for Ninja blender blade sharpening. To bring in the cutting edge performance of your blender back, just follow these simple steps.

Step 1: Unplugging the Blender and Removing the Jug

If your blender is plugged into the power outlet, unplug it first as you don’t want to get shocked. Then slowly remove the jar from base. Hurrying might make you slip the jug and cause a crack.

Now carefully slip your hands into the jar and grab the blades. To get it out of the jar, you need to twist it anti-clock wise. Do it slowly as even blunt blades can get you a cut at times.

Step 3: Wash Up the Blades

Once you’re done removing it, take some soapy water to clean it up. Make sure the water is warm. Now rinse it in the water and clean up every food bit sticking on it. In case normal rinsing is failing to remove them, use a toothbrush to clean them up.

You don’t need any special tool to sharpen Ninja blender blades. Regular sharpening stone or tool is enough for that. Start running the blade on the tool and make sure you’re running it opposite of your body as you don’t want to get yourself injured.

Once you’re feeling like the blade has gained the previous level of sharpness, put it back in the jar. Gently twist it clockwise to install it back but do it by saving your hands from the sharp edges. 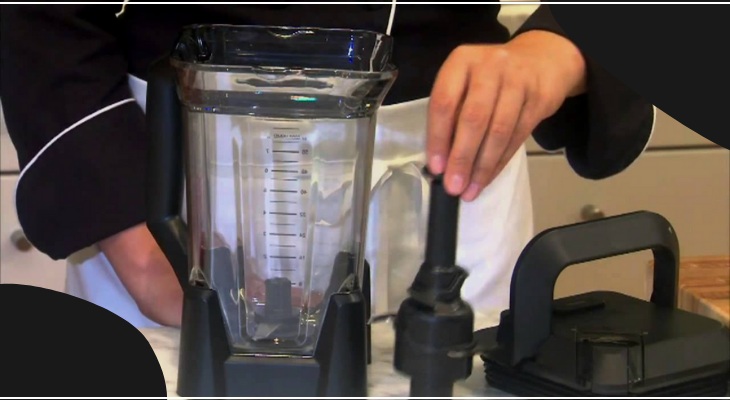 What Makes the Blades Blunt?

We believe, along with knowing how to sharpen Ninja blades you also deserve to know what makes them blunt. Here are a few reasons we have figured out.

There’s no rule that you’ll have to blend only softer foods in the blender. Depending on your recipe, you might have to lay your hands on the hard one as well. But blending them frequently increases the chances of making the blades blunt before the time.

Not Cutting Hard Foods into Pieces

When you’re putting something big and hard in the blender, it might chop the food off but that puts extra pressure on the blades. What comes up as the result of so is some edge-less blades.

Ice indeed is a hard item but for some recipes like ice cream, using them becomes mandatory. But even ice can make the blades go blunt, gradually.

Also Read: How To Make Ice Cream In A Ninja Blender

Only sharpening ninja blender blades are never enough if you’re not taking care of them in a proper manner. But the thing is, that’s easy as pie you follow a bunch of simple yet useful tips like -

Each and every instruction given on the Ninja blender manual is for easing up the usage and care part of the blender. It’s also got clear instructions for assembling and disassembling of ninja blender blades as well. Try to follow them every time you take the blades out for cleaning or sharpening.

Like the metal blades, it’s suggested to avoid over-sharpening if you’ve made your Ninja blender blades dull. That’s because, this way you’ll make the blade loose metal and it’ll lose its effectiveness with time.

Tip – 3: Sharpening the blades occasionally is a good idea

You always don’t need to wait to let the blades get blunt for sharpening them. If you’ll sharpen them occasionally, you might not have to see blur blades ever again.

Tip – 4: Know When to Replace the Blades

For frequent users, ending up with dull blades is quite normal. But if it’s being blunt more frequently than it should be, then probably it’s time to get it replaced. This is the point where it doesn’t matter whether you know how to sharpen Ninja blades or not, you’ll have to get a new one.

Tip – 5: Clean the Blade Up Before Putting It in the Jar Again

When you’re sharpening the blades, there is a chance of the metal dust remaining on the blades. So, it’s better to clean the blade again before you put it back in the jar.

Accidents won’t be informing you before happening. So, to be on the safe side, try putting on some protective gloves in order to save yourself from any kind of probable accidents.

Tip – 7: Keep Blender Clean Before and After Use

To keep the blades healthy, you need to keep the blender clean as well. Whenever you’ll do any kind of blending, make sure that you’re cleaning up the blender before and after using it. And yes, don’t forget to put all the parts in a safer place, especially the blades.

There’s no way to deny that Ninja blenders are among the finest blenders out there. But even their blades have a limit and can get blunt. Don’t worry; we don’t think that’s going to be a problem for you as now you know how to sharpen ninja blender blades.