How To Use Ninja Blender – Step By Step

When it comes to Ninja blenders, it’s hard to think of it as anything but one of the best blenders out there. After all, its pure blending power can turn any hardcore ingredient as good as a pile of squashed liquid or powder and try on your favorite dish.

But we don’t see that happening when you don’t even know how to use Ninja blender. Don’t worry; if you’ve got one on your countertop and you’re roaming confused about how to make it useful, then today is going to be the last day of so.

That’s because, in a while, we’re going to get you every ins and out you need to know about how to utilize a Ninja blender as the most perfect blending tech out there.

What we love the most about Ninja blenders is, they’re amazingly easy to use when you’re following the right instruction. But they can get really messy if you do the opposite of so as well.

So, the first thing you need to take care of on the way of learning how to use a Ninja blender is understanding the way it works. Don’t worry; once you go through the steps, how does the Ninja blender work will get clear as a day to you. Let’s get started then?

Step – 1: Get the Blender Assembled

Clearly, a blender is a piece of tech that is good as nothing until it’s assembled. So, the first thing you need to do for using a ninja blender is put all of its parts together to make it functional.

Pick up the blender pitcher first and put it on the blender base in a way where the corners of it form a diamond shape. Make sure that the handle is facing the front right or front left position. It’s important as that’s how the pitcher will seat perfectly on the base.

Now start twisting it clockwise till you hear a click. That click is the indicator of the pitcher getting locked on the base. Now get ready to place stacked blades into the pitcher.

Once it’s set in its place, lower the handle and it’ll get the lid locked to the pitcher. You’ll hear a click after lowering the handle which is also an indicator of the lid getting locked properly. If you’ve still got any confusion about the assembly process, follow the instructions on the manual that comes with the blender.

Step – 2: Powering up the Blender

Now grab the plug and put it in your closest power outlet. It’s nothing impossible to have a power outlet far from the countertop. In such cases, try using a wired multi-plug with a long enough wire. But you’ll have to keep in mind that the multi-plug is compatible with the blender’s power requirement. 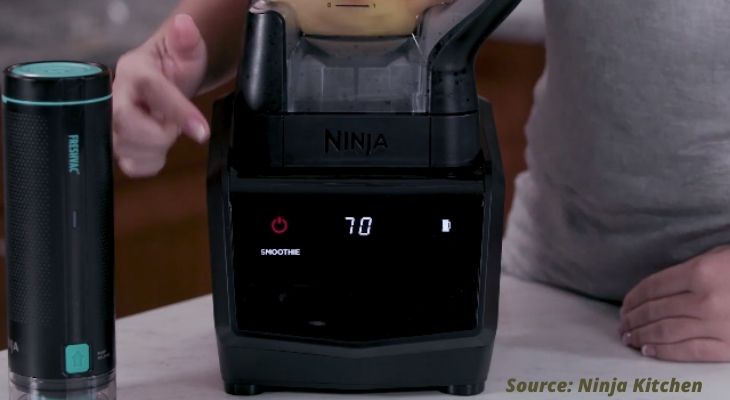 Read Next: How To Turn On Ninja Blender

Step – 3: Getting the Ingredients

Keep holding down any of those buttons according to your need and keep it that way till the ingredients reach your desired blending state. If your Ninja blender model comes with a single-serve option, you can try that as well as that’s enough for a single person. 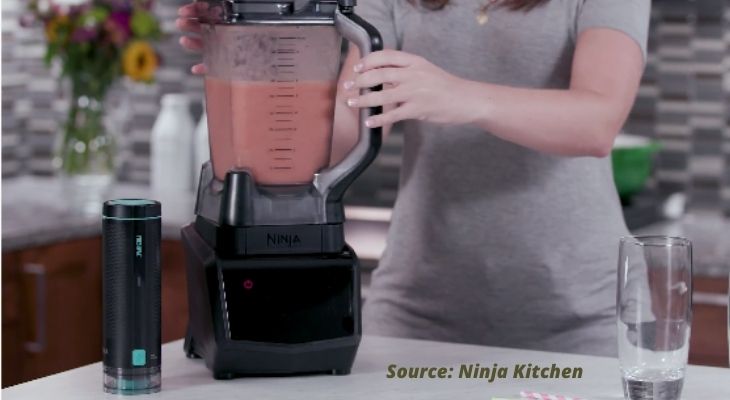 Tips at times can work like a day-saver even if you’re using such a powerful tech as the ninja blender. So, here are a few tips you better keep in mind before use or learn how to use your Ninja blender.

It’s always a bad idea to use hot ingredients in the blender. That’s because letting hot steam accumulate within the blender might make the lid blow off which is definitely not going to be something you’d like. But If you use a specific model that compatible to hot ingredients then this term won't make any problem for you. One of the blenders for hot ingredients from Ninja is Ninja HB152 Foodi Cold & Hot Glass Blender.

There’s no doubt that Ninja blenders come with strong blades but even they can get blur at times if you use hard food on them. So, we’d say try to avoid using hard foods.

Not all kinds of food are going to need that but for solid food, it’s better to cut them into pieces before you try to blend them. This way not only the blade will be secured but also will always take less time in the blending process.

Tip – 4: Clean the Base Carefully

Clearly, the base is what makes the electric power useful during the blending. So, rather than thinking about cleaning the base by submerging it into the water, clean it with a sponge or damp cloth.

Tip – 5: Leaving the Blender Unattended Can Be a Mistake

We don’t know how many Ninja blenders you’ve seen so far, but one thing you’ll notice is common in them when it comes to using ninja blender. That is they all ask the user to attend it during the blender. Otherwise, there’s a chance of the ingredient spreading all over the place and making a mess due to a slipped lid.

When you’re blending in a row, it’s nothing unusual to see the pitcher getting a little hot. If you see anything like this, then you better stop right there and wait till all of it cools down again.

Read Next: How To Sharpen Ninja Blender Blades

We bet you’ll find it harder than even ever to find a better blender than the ones from Ninja. But for that, you need to know how to use Ninja blender in the first place which we believe is not going to be a problem for you from now on.

Just don’t forget to keep the tips noted in your head so that you can avoid any unwanted situations with the tech.